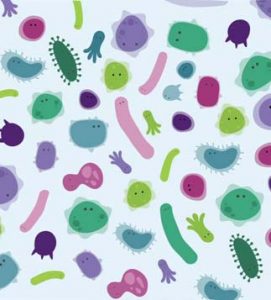 The study set out to investigate whether alterations in the developing intestinal microbiota and immune markers precede celiac disease (CD) onset in infants at familial risk of developing the disease. 1

It was concluded that the microbiota of the children who subsequently developed the disease showed a significant reduction  in bacterial diversity over time.

A nested case-control study was carried out as part of a larger prospective cohort study, which included healthy full-term newborns (> 200) with at least one first relative with biopsy-verified CD.

The present study includes cases of CD (n = 10) and the best-matched controls (n = 10) who did not develop the disease after 5-year follow-up. Fecal microbiota, assessed by high-throughput 16S rRNA gene amplicon sequencing, and immune parameters were profiled at 4 and 6 months of age and related to CD onset.

The microbiota of infants who remained healthy showed an increase in bacterial diversity over time, characterized by increases in Firmicutes families, but not those who developed CD.

Infants who subsequently developed CD showed a significant reduction in sIgA [*] levels over time, while those who remained healthy showed increases in TNF-α correlated to Bifidobacterium spp.

[*Secretory Immunoglobulin A (sIgA) is an antibody secreted by mucosal tissue and represents the first line of defense of the GI mucosa. Learn more]

The findings suggest that alterations in the early trajectory of gut microbiota in infants at CD risk could influence the immune maturation process and predispose to CD, although larger population studies are warranted to confirm this hypothesis.

This is the first study to identify features of the bacterial community assembly and intestinal immune milieu that precede CD onset and that may constitute predictive markers of disease risk and modifiable risk factors.

Although there were not great differences in microbiota composition between the two infant groups (those who later developed CD or those who remained healthy), specific differences were identified in the early evolution of bacterial communities and of immune markers associated with subsequent CD development.

Our study shows a significant increase in microbiota diversity of control children between the ages of 4 and 6 months, which did not occur in the child group who went on to develop CD.

Similarly, specific bacterial communities followed a different trajectory over time in the study groups, revealing differences in the phylum Firmicutes, and the families Enterococcaceae and Peptostreptococcaceae belonging to this phylum, whose proportions increased from 4 to 6 months only in those children who did not develop CD.

Previous studies reported that the phylogenetic diversity of the microbiota in the first stages of life increases over time [30, 31, 32]. It was also estimated that the Gini-Simpson α-diversity index increases by 0.008 per day on average during the first month of life [33].

However, in the child group who went on to develop CD, diversity did not increase significantly over time, showing an uncommon developmental pattern (“premature maturation”) compared to the healthy group, since they started with a higher basal diversity level.

Therefore, a progressive increase in microbial diversity seems to be a feature of the evolution of a healthy microbiota, which may increase resilience to CD.

A previous prospective study with only one case developing CD at 24 months of age also reported reductions in bacterial richness before disease onset (6 to 10 months of age) [34].

However, the findings of the aforementioned study are of limited value since statistical analysis could not be performed with a single CD case.

Furthermore, the results are incomparable since the cited study aimed to investigate how CD onset was affected by the time the gluten was introduced into the diet, introducing different variables from those considered in our study.

A number of observational and to a lesser extent intervention studies in adults have generally associated an increased bacterial diversity with a healthy phenotype [35, 36, 37].

The present study, however, suggests that a timely maturation of the gut microbiota towards one of higher complexity and diversity might also be required for proper development of immune tolerance in the early stages of life and that premature maturation and exposure to a complex microbiota may increase disease risk.

In our study, a control group of infants matching the disease group regarding the type of milk feeding, mode of delivery, and the HLA genotype was selected for comparative purposes.

Therefore, the early increase in diversity observed in the infants who subsequently developed CD could be due to other uncontrolled environmental exposures that influence colonization waves of the infant’s gut (perinatal factors, hospital and home environment, number of siblings, etc.) or additional genetic factors that create permissive conditions to accommodate a more heterogeneous microbiota.

Although the effect of host genetics on the microbiota is less known than the effects of environmental factors, associations between the microbiome and genes related to innate immunity that could control gut colonization (e.g., pattern recognition receptors) have been identified through genome-wide association studies [38].

Intestinal infections and their treatment with antibiotics have been associated with an increased risk of developing CD in some studies [13].

However, our study infants only suffered from otitis and respiratory tract infections during the study period and the antibiotic treatment was not significantly associated with CD onset. A possible impact of antibiotic intake on the microbiota of our infants could not be completely disregarded due to the relatively small size of the study.

Nonetheless, the microbiota of those infants who later developed CD already presented a pattern of maturation significantly different to the control group at 4 months of age (before the intake of antibiotics), according to the differences in the bacterial community membership (Jaccard similarity index) that were attributed to increases in Firmicutes.

Taking into account the CD genetic risk classification of the infants included in the study, we did not find significant association with the intestinal microbiota composition either.

These results are in agreement with our previous studies reporting no major differences in microbiota composition as a function of genotype when comparing risk groups 1 and 2 by qPCR [23].

In our previous studies on CD, we found that the high-risk genotype for developing CD was associated with reduced numbers of Bifidobacterium (Actinobacteria phylum), specifically of the species B. longum [23] compared to the low-risk genotype.

Accordingly, at that time, we hypothesized that microbiota differences associated with the HLA-DQ2/8 genotype could constitute an additional risk factor for CD onset.

The present results further support the hypothesis that a reduced abundance of B. longum, dependent on both genetic and environmental factors, may constitute a risk factor for CD development and constitute an early predictive biomarker of CD.

Our present study also suggests that early proportions of Firmicutes and members of the Actinobacteria phylum (B. longum) in infants at familial risk of developing CD are influenced not only by the HLA-DQ2/8 genotype [23], but also possibly by other genetic and environmental factors.

However, considering the complexity of the Firmicutesphylum, larger cohort sizes and in-depth taxonomic studies will be needed to understand the potential biological role played by specific components of this phylum and their role in CD onset in response to other environmental factors.

Interestingly, we also observed a faster reduction in sIgA fecal levels in the children who went on to develop CD over time compared to healthy ones.

sIgA is generally considered to act as a first line of defense in the intestine by interacting with intestinal antigens and microbes, preventing their penetration into the lamina propria, and therefore contributing to immunological homeostasis [39].

sIgA is also thought to play a role in mucosal sensing and control of commensal bacteria colonizing the gut [40]. Besides, sIgA influences the development of dendritic cells with a tolerogenic phenotype, which play a key role in maintaining intestinal homeostasis [41, 42].

Thus, it can be hypothesized that a premature reduction of sIgA levels in the group of children that developed CD could be related to shifts in bacterial community development which impact the maturation of the mucosal immune functions, possibly increasing the risk of developing autoimmune dysfunctions.

Moreover, the fact that CD frequently occurs in subjects with selective IgA deficiency has been interpreted as an indicator that there is a reduction in the infant’s mucosal protection [6].

The differential profiles of fecal cytokines over time in the two groups of infants may also reflect differences in gut microbiota maturation.

Early increased levels of IL-6 could be related to premature maturation of the microbiota of infants who finally developed CD, while increased levels of TNF-α at 6 months could reflect the host response to a more diverse microbiota acquired at this age by infants who remained healthy, and to its specific components such as Bifidobacterium, which showed a positive correlation with TNF-α.

The strength of this report lies in the exhaustive prospective follow-up of the study cohort, where bias that usually affects retrospective studies has been excluded.

The main limitation is the relatively small population size of the prospective study, taking into account the low prevalence of CD in this at-risk population (~ 10%). This limits the statistical power to investigate the effects of different covariates, including the possible role of antibiotics, which would have helped to reach more robust conclusions.