Latest News
You are here: Home1 / Gluten-Free News2 / How to Host Holiday Dinners in an Age of Dietary Division 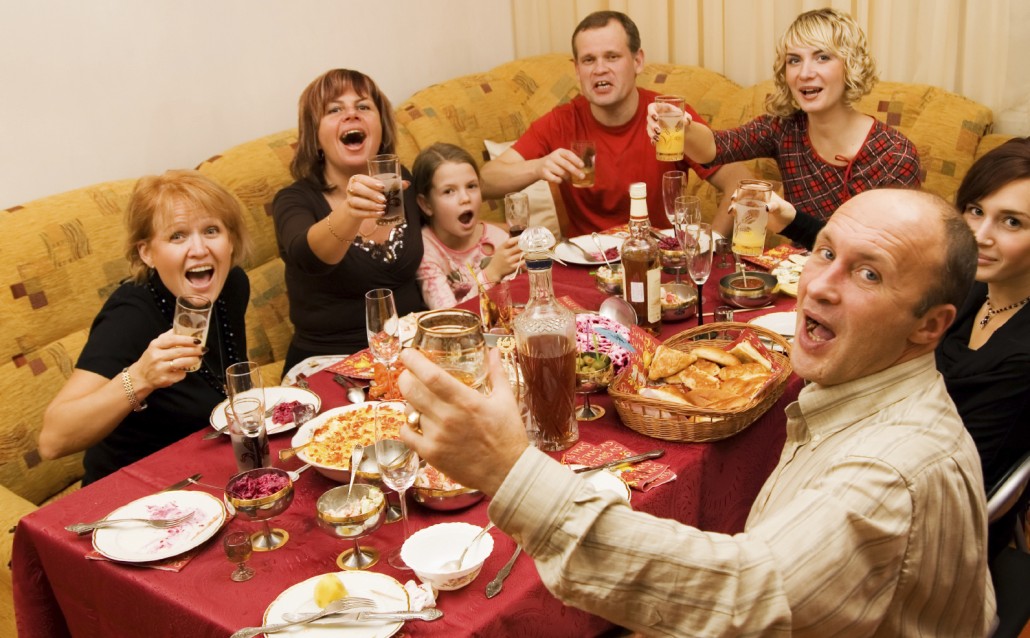 Originally posted in Vox as a guide to “How to host Thanksgiving dinner when everyone has a dietary restriction,” this article offers great suggestions on how to host  – and / or be a guest – during our upcoming Christmas holiday season. Julia Belluz* asked readers to share their stories and tips about how they cope with guests with weight-loss diets, health issues, aversions, religious beliefs, and world-changing agendas. I’m sure you’ll see your situation in here somewhere!

Let’s face it: Our food culture has shifted from one where everyone pretty much ate the same thing to a hyper-individualized one, where guests may not be willing to break the same bread, or eat any bread at all.

On holidays like Thanksgiving, we bring our weight loss diets, health issues, aversions, religious beliefs, and world-changing agendas to the dinner table with us. This isn’t a bad thing; it’s evidence of a growing awareness about where our food comes from and what it can do to our bodies. But it does mean hosts are left panicking over how to accommodate everyone’s needs and preferences.

This challenging new reality was all too familiar to many of you who wrote in. Elie Challita described a dinner in which one person had celiac disease, another was allergic to garlic, a third was pescatarian, and a fourth couldn’t eat anything spicy.

“I hadn’t done that much research since getting my masters,” Challinta wrote.

Laurel Hiestand told us that her “daughter eats no meat whatsoever. My son-in-law likes turkey and ham, but eats no vegetables. My granddaughter doesn’t like turkey, but will eat ham. My husband won’t eat sweet potatoes. We’re having pizza.”

Accommodating others’ restrictions can also be irritating — particularly when people who claim to be on a restrictive diet indulge in dessert with supposedly taboo ingredients. “For people that are choosing to eat no gluten,” Liz Preti Battista wrote, “they better not touch my homemade pies and dinner rolls.”

But amid the tales of frustration was a lot of good advice about how to manage. Turns out there are many ways to make a Thanksgiving that has to cater to different food needs easier and less stressful. “Thanksgiving is about being together, not a set menu,” as one reader, Judy Shenk, told us. Considering this trend toward complicated eating likely isn’t going to reverse anytime soon, coping skills are critical — as is finding ways to allow people to their enjoy food as they want to, without judgment. Here were some of your best tips.

Cook things that are adaptable 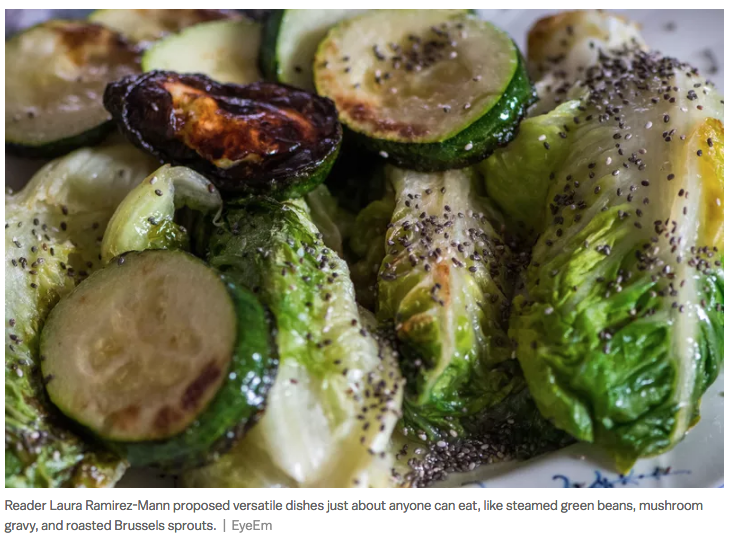 Instead of trying to make unique dishes to accommodate everyone, look for dishes that can be easily adapted to suit your guests’ needs.

Laura Ramirez-Mann proposed versatile dishes just about anyone can eat, like steamed green beans, mushroom gravy, roasted Brussels sprouts, and baked sweet potatoes with sides of candied pecans, brown sugar, and butter that guests can add on their own. “It really is not that hard,” she said.

Donna Schnur Birkholz sets aside small portions for those who with food allergies before adding the offending ingredients. “For example, separate some boiled potatoes before adding the butter or milk, for dairy allergy; sweet potatoes can be set aside before the nuts are added, for a nut allergy.”

For Mary Wiser, the best dinner these days is a big old bowl of grains that guests can dress up themselves with fixings. “Set out a steamed grain, some proteins, some veggies, some sauces, and let everyone do their thing.”

It seems that more and more people are resorting to potlucks to manage the dietary divisions.

“Everyone with a special diet brings what they like and host provides the ‘traditional’ staples,” wrote Margaret Torres Parish, who hosts potluck Thanksgivings at her home. “Keto [low-carb] dieters can bring their own cauliflower mashed potatoes and gravy made with almond flour. Vegans bring their own plant-based main course. Hosting Thanksgiving doesn’t mean I’m running a restaurant.”

And many people with allergies or restrictions are now accustomed to bringing their own dishes to dinner, even when there’s not an official potluck.

“I have wheat and soy allergies and fully expect that in the process of making a huge meal, people will forget or they don’t realize that something has wheat or soy. It happens,” wrote Sara McEachern. “That’s why I always offer to bring something — usually a side — that I know I can eat. That way if they forget or if I suspect cross contamination, I know I’m safe and won’t leave hungry.”

This approach has made the dinner table a more varied place to be. It’s not just turkey, potatoes, and pecan pie anymore; herb-crusted tofu, quinoa with veggies, and gluten-free, vegan pies are becoming more regular stand-ins.

Nicole Waller says she has a severe gluten allergy, so she always brings a side or dessert she can eat. Last Thanksgiving, that meant gluten-free stuffing, a Paleo pumpkin pie, gluten-free bread, and a pumpkin coffee cake. “I shared with everyone who wanted any,” she says.

Be kind to people with restrictions 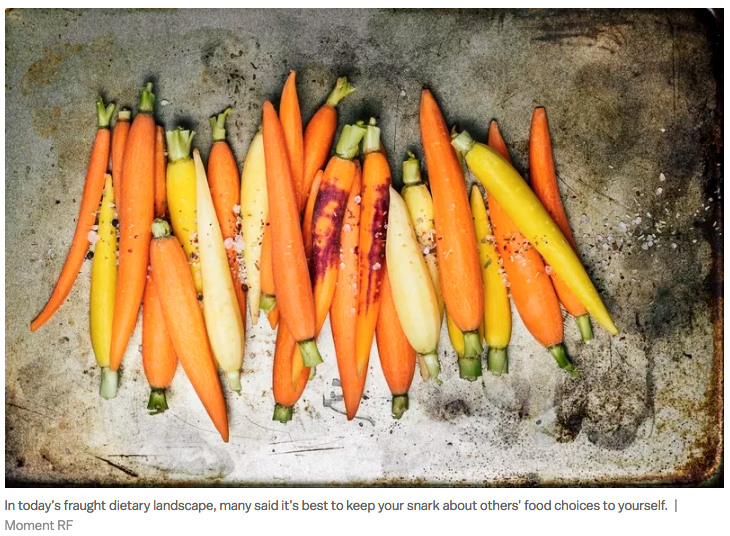 Several people described difficult health issues that make eating outside your own home more burdensome and even scary, including celiac disease, an autoimmune condition that causes people’s immune systems to violently attack their small intestine whenever they eat gluten. And it certainly doesn’t help when these kinds of dietary needs are met with an eye roll.

Brenda Meng has Crohn’s disease, a chronic inflammatory bowel disease that affects the lining of the digestive tract. Painful symptoms can be triggered by fatty or sugary foods, as well as dairy. “So any holiday meal that we don’t host is fraught with food landmines.” On Thanksgiving, she eats around things that might make her sick, but she usually tries to simply host the meal — since it’s bound to be less risky.

Valerie Habel Szach wrote in about her incurable bladder disease, interstitial cystitis, that forces her to follow a restricted diet. “Eating the wrong foods can send me into a very painful flare for a few days. So please don’t criticize all people who have to eat a special diet,” she says. She has been respectfully declining Thanksgiving dinner invites for years so as not to complicate dinner for the cook. “It’s not about what I do or don’t like, it’s about what I can and cannot eat,” she wrote.

In today’s fraught dietary landscape, many said it’s best to keep your snark about others’ food choices to yourself.

“I have a handful of allergies and a chronic esophagitis condition which means there is a complicated list of foods I should not eat,” wrote Jeffrey Small. “Nobody likes to hear comments about the food they have selected. If I say ‘No. Thank you,’ that means ‘No. Thank you.’”

“I don’t sweat my limitations and wish others didn’t either,” wrote Christine Kintner. “The only thing I dislike is if people snidely call attention to my eating or lack thereof, as the case may be. Thank god I can still have wine, haha! And I am blessed to have understanding family on both sides.”

Educating yourself about how to respect food restrictions is another must these days, you said.

Evelyn Stice suggested cleaning the kitchen before, during, and after cooking, as well as ensuring every dish has its own clean utensils to avoid cross-contamination.

“If you are hosting someone with allergies,” Schnur Birkholz wrote, “treat any food containing that allergen in your kitchen as if that food and anything it touches is covered in raw chicken blood. Cross-contamination is a big deal for raw chicken blood, and it is a bigger deal for the allergen.”

Respecting people’s religious restrictions can also be a challenge. Hosting a kosher Thanksgiving, for example, might mean asking your guests about their level of kosher observance, seeking out ingredients and products with a kosher certification, and being sure not to mix meat and dairy, since it’s prohibited by Jewish dietary law.

Be flexible when you can. It’s Thanksgiving [or Christmas], after all. 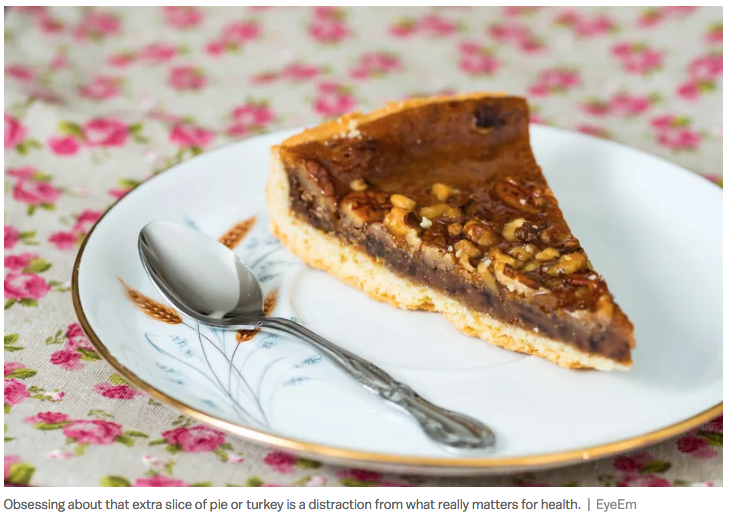 For people with food restrictions that are more lifestyle-driven, you suggested considering taking a break on the holidays.

“This is the best thing about being an adaptable, flexible, socially competent human!” Jenn Yun wrote. “With the exception of people with serious medical conditions or life-threatening allergies that require dietary management, we can all choose to let go of our dietary restrictions for one meal on one day of the year, and just enjoy the company of our friends and families instead of making it all about the food.”

I’ve also made the case for guilt-free holiday indulging. Obsessing about that extra slice of pie or turkey is a distraction from what really matters for health. Much more important in the long run is creating an environment and habits that foster healthy eating for the other 364 days of the year.

“Thanksgiving is about getting together with family,” wrote Jacqui Auterman, who was a vegetarian for 30 years. “The food is just an excuse to gather. I do eat some meat now and then these days, but I’m gluten and soy intolerant and so is my sister. We make gluten free goodies to bring and we bring the crackers, so it’s all good! It’s really not that big of a deal unless you make it one.”

*About the author, Julia Belluz 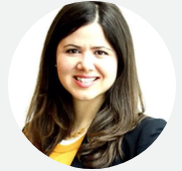 Qualified visitors, simple packages, and great rates equal unbeatable ROI. Advertise on the Scene
What to Do When the Gluten-Free Diet Doesn’t Work?

New to The Celiac Scene! Pomme Natural Market in Nanaimo!
Scroll to top
Change Location
Find awesome listings near you!