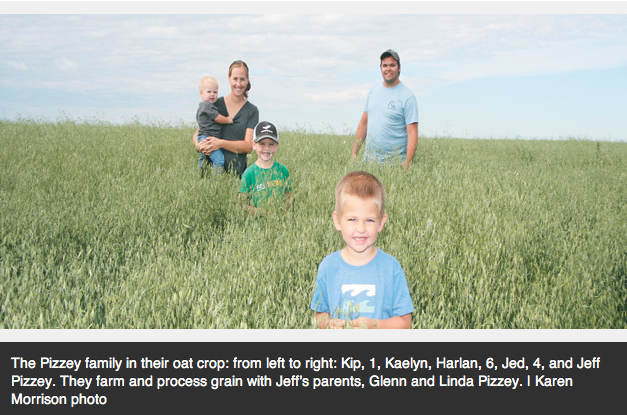 WESTERN PRODUCER August 20, 2015 / ANGUSVILLE, Man.  Jeff, with his wife, Kaelyn, and his parents, Glenn and Linda, believes in applying proper science and guaranteeing what they grow on 8,500 acres.“It’s not all about yield but yield and quality and operating as efficiently as you can to lower the cost per bushel,” said Jeff of the oats, flax, canola and yellow peas the family grows. Their farm and Pizzey Ingredients processing plant in western Manitoba are gluten free.

“We are not in business for people who are gluten free because of Wheat Belly,” said Jeff, referencing the book that purports to show the negative effects of gluten in grains. “We’re in it for celiacs,” he said of the disease that causes digestive harm in sufferers when gluten is consumed. “At the end of the day, we are what we eat,” added Glenn. “Nourishing the plant is what produces healthy end products.”

Glenn said traceability is key in the food business. “Every company now is concerned with allergens. Traceability is essential in any food quality program.” The Pizzeys receive help with tracking, data networks and agronomics from a team of experts at Agritrend. “When we haul a load of gluten-free oats to the Midwest U.S., when it arrives at the door, we know what field it came from, seeding dates, what nutrients were used. It can be guaranteed,” said Jeff.

“It’s not like an organic program where you just trust the person didn’t apply chemical. This is scientific and tested on every truck coming in at harvest and every one leaving the farm. In God we trust, but everybody else has to bring their evidence,” said Glenn, who oversees research and product development at the plant.

He and Linda formerly ran a milling and baking company and resurrected flax milling after a similar local enterprise burnt down. They produce a host of patented ingredients for beverages and baking. Linda and Glenn saw benefits in having direct connections between the producer, processor and consumer. “The market was there but we had to have the ability to develop it,” said Glenn.

“We got interested as it’s such a compelling nutrition story,” Linda said of flax’s fibre and protein content and omega 3 health benefits. This year, Jeff expects his flax crop to be slightly below average. The seeds were planted in ideal conditions, unlike the previous years’ battles with wet spring weather. But after six hours of hard frost on May 30, the crop had to be reseeded.

“We lost 80 percent of the flax and 50 percent of the canola,” he said. Then dry conditions were followed by too much rain, which washed out the reseeded crop. Later, herbicides had to be applied five times to kill grassy weeds, and that damaged and thinned the flax. However, the oats and canola were looking good in July.

“Canola may be one of our best in 10 years,” said Jeff. He and Kaelyn, with their boys Harlan, 6, Jed, 4, and Kip, 1, live on the same quarter as Glenn and Linda. Kaelyn said that has advantages for the boys, who are close to their grandparents and are here this day in the plant’s second floor boardroom.

“It’s really handy being all close together and helping each other out,” said Kaelyn. Each family member has an area of expertise but all pitch in where needed.

“We can cross over and do the other person’s job but we’re not as good at it,” said Glenn. Kaelyn, like her mother-in-law, grew up on a farm in Saskatchewan. She is the accounting manager at J.G. Pizzey Inc., while Jeff manages the day-to-day farm operation and Linda manages the milling business, ingredients and marketing.

“My job is to take that information that Glenn brings to the company and try to marry that with the products and customers that would use our ingredients,” said Linda. Their daughter, lawyer Julie Faber, helps with compliance and regulatory issues.

“Flaxseed is not snake oil,” Glenn said. “Any success we’ve had has been from sticking to science. It is good stuff and we don’t need to make anything up.”

Linda and Glenn keep updated on industry trends through associations that range from the Manitoba Food Processors Association to the Flax Council of Canada to the Mayo Clinic. They also regularly attend trade shows, conferences and educational sessions. “Through our networks, there’s a good exchange of knowledge that helps us run the business,” said Glenn.

Jeff and Kaelyn say their family vacations off the farm allow time for long-term strategic thinking. “It’s a time to research and reflect on what you did last year and what you can do better. There’s always room for improvement,” said Jeff.

“Being away, we don’t totally shut it off,” said Kaelyn. Travel is time consuming because they live more than three hours from an international airport. Their location, although set amidst a large flax growing area, is challenging because 90 percent of their business is in the United States and they must deal with load restrictions on rural roads each year. Linda said it would make good business sense to have a processing plant south of the border but the family farm has a long history in rural Manitoba, where it employs 25 local people.

“Families depend on this,” said Glenn.

Did You Know? Corn Thins are Gluten-Free and Non-GMO!
Scroll to top
Change Location
Find awesome listings near you!