ANN ARBOR, Mich. – Consumers are not well informed around the topic of gluten, according to a new survey from NSF International, a global public health and safety organization. The survey found that despite having heard of gluten, most Americans cannot correctly define it or identify products that could contain the protein. Printer-friendly version: Infographic 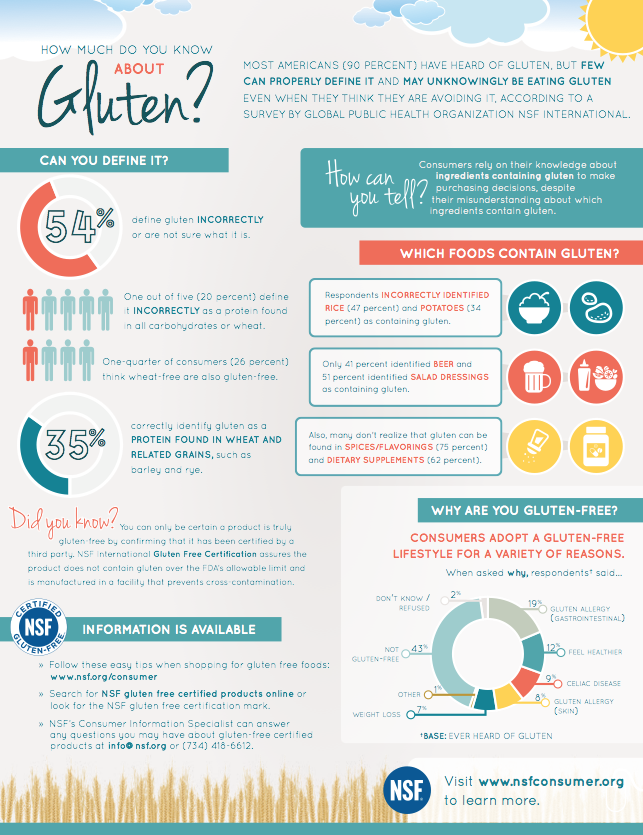 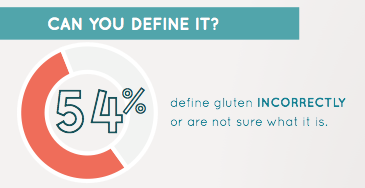 The survey of 1,012 Americans found that although 90 percent have heard of gluten, only 35 percent correctly identify it as a protein found in wheat and related grains, such as barley and rye. Common misconceptions among those who have heard of gluten are that wheat-free products are also gluten-free (26 percent) and gluten is wheat (15 percent).

The confusion becomes more apparent when consumers who have heard of gluten are asked to identify products that contain gluten. Respondents incorrectly identified rice (47 percent) and potatoes (34 percent) as containing gluten. Conversely, processed foods that often contain gluten, such as beer and salad dressings were not identified by 41 percent and 58 percent of Americans, respectively. 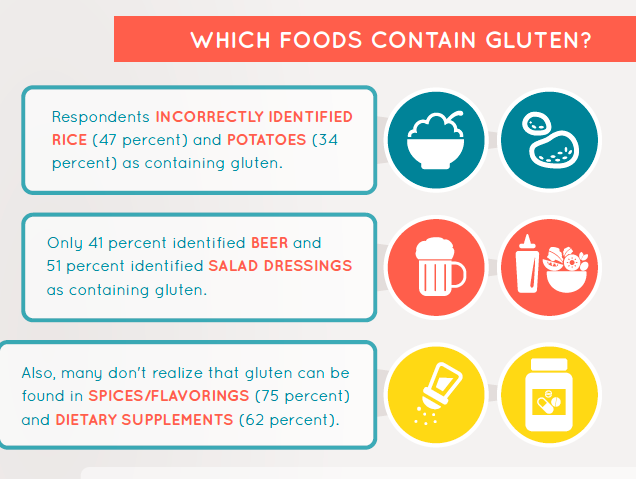 “These survey results indicate consumers concerned about gluten in their diet may unknowingly be eating gluten, even when they think they are avoiding it. It suggests a need for education and a clearer way to identify gluten-free food and ingredients for Americans that desire a gluten-free diet,” said Jaclyn Bowen, Director of NSF International’s Consumer Values Verified Program, which offers a Gluten-Free verification seal.

This knowledge gap on where gluten is found can become problematic for those consumers relying on their knowledge of gluten-free to make purchasing decisions. According to the survey, nearly half (46 percent) of Americans aware of gluten say their first step in determining if a product is gluten-free is to view the list of ingredients on product packaging. Another 31 percent look first for a gluten-free seal or mark on the packaging.

“Gluten is a relatively new topic for general consumers and it’s a complex issue. It’s clear from our survey that there are some misunderstandings around gluten and where it’s found,” added Bowen. “Many areas of the food industry such as restaurants and bakeries do not have a certification process, so if you’re avoiding gluten ask if there are separate stations where gluten-free food is prepared.”

Bowen also suggested that consumers not rely on label ingredients alone. “Gluten is found in so much more than wheat, so the best way to protect yourself is to look for third party gluten-free verification via a seal or mark on the product packaging.”

Other findings from NSF International’s gluten-free survey include:

Consumers are unclear about gluten in processed goods. About half (48 percent) of consumers do not realize gluten can be found in either spices/flavorings or dietary supplements.

Knowledge varies by age. Older Americans (65+) are significantly more likely than younger Americans (18-34) to say they are not sure what gluten is (42 percent vs. 31 percent, respectively).

Consumers are wary of unsubstantiated gluten-free labeling claims. Only a little more than half of Americans believe products that use the words ‘gluten-free’ on the label have been verified to be free from all gluten (54 percent).

Awareness of seals/marks vary by age. Younger adults (18-34) are more likely than older individuals (65+) to look for a gluten-free seal or mark first to determine whether or not a product contains gluten (36 percent vs. 25 percent, respectively). 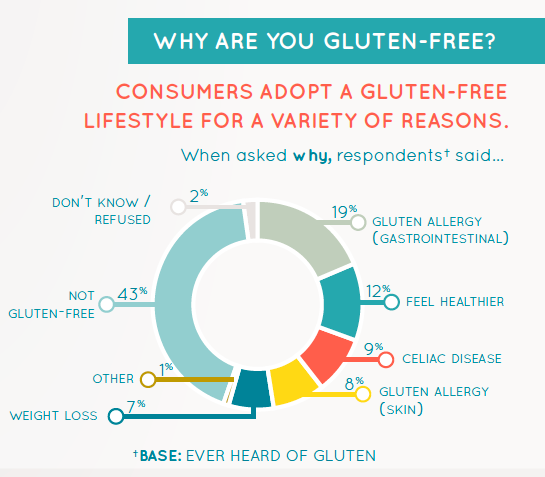 Bowen added that gluten-free grains like oats, buckwheat and teff might be processed in the same plant and sometimes the same machine as products containing gluten, causing cross-contamination. “If the plant doesn’t have the proper ventilation and cleaning processes, the food can become contaminated with gluten. This becomes a bigger issue when you’re buying foods for those with Celiac disease or other gluten sensitivities. The best line of defense is to look for a gluten-free verification which is represented as a seal or mark on the package, such as NSF International’s Gluten-Free seal.”

Gluten-Free: What You Need to Know Gluten-free diets are increasingly popular, whether as a personal choice or a necessity for those who suffer from celiac disease or gluten sensitivity. Over 50 percent of Americans believe products that say “gluten-free” on the label have been verified to be free from all gluten. In fact, the only way to be sure of verification is to look for a gluten-free certification mark!

What is Gluten? Gluten is a protein found in grains such as wheat, rye and barley that is responsible for the elastic nature of dough. For many individuals this protein is easily digestible and has no effect on their overall health. But for those with any type of gluten intolerance, the ramifications of eating gluten can range from constipation and bloating to diarrhea.

Gluten Intolerance or Sensitivity The most severe type of gluten intolerance is celiac disease, an autoimmune disease and genetic disorder which affects roughly one percent of the American population. However, it’s estimated that gluten sensitivities affect a much larger portion of the population. In fact, the National Foundation for Celiac Awareness estimates that as many as 18 million Americans may have some form of gluten sensitivity – a condition that affects the intestines and immune system when gluten is consumed.

Here are a few things to keep in mind if you suffer from gluten intolerance or sensitivity:

Take additional caution with processed foods. It is more difficult to identify gluten in foods that are mixed and processed. Looking on manufacturer’s website or calling its customer service line could help you uncover hidden gluten before purchasing.

Consumers are unclear about gluten in processed goods. About half (48 percent) of consumers do not realize gluten can be found in either spices/flavorings or dietary supplements.

Be an informed diner. Restaurants are jumping on the gluten-free craze, but just because a menu item says gluten-free doesn’t mean it is. One-third (33 percent) of consumers incorrectly believe the government regulates claims made on restaurant and bakery menus. It is important to ask what is in the food and where and how the food is prepared. This can help you to avoid hidden gluten as a result of cross-contamination during the food preparation process. 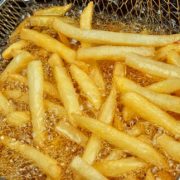 Deep-Frying Wheat Products Does NOT Make Them Gluten-Free 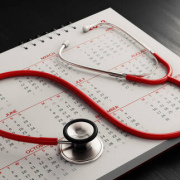 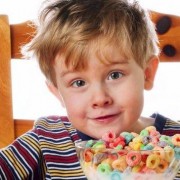 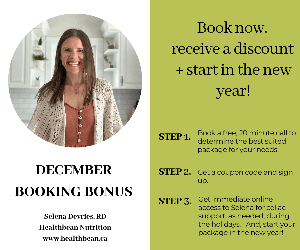 Qualified visitors, simple packages, and great rates equal unbeatable ROI. Advertise on the Scene
How Many Doctors Did You See Before Your Diagnosis?

Alana Elliott, Founder of Libre Naturals, Shares Her Thoughts on ‘Back...
Scroll to top
Change Location
Find awesome listings near you!