Latest News
You are here: Home1 / Gluten-Free News2 / My Letter to the Canadian Food Inspection Agency about SUBWAY Restaura... 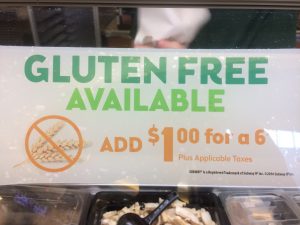 My visit to this restaurant was prompted by an email message forwarded to The Celiac Scene by the President of the Victoria Chapter of the Canadian Celiac Association. 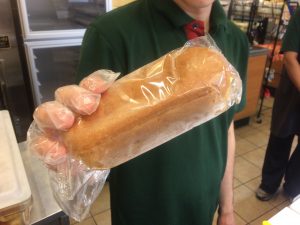 As a result, on Thursday, August 3rd, 2017, I visited SUBWAY in my local food court and could not help but notice the prominent ‘gluten-free’ sign. I asked the server to walk me though how he would serve a consumer who identified themselves as a celiac needing a gluten-free meal.

He misunderstood and took that to mean that I was ordering a GF so it allowed me to see that he did change into fresh gloves and procured what he indicated was a GF bun from a separate cabinet.  While he did place the bun on a fresh piece of parchment paper, the paper lay upon the same preparation line where all gluten buns are prepared. Gluten crumbs covered that entire surface so I was very uneasy about the potential risk of cross contamination.

I watched as the food prep worker making the sandwich ahead of what would have been mine added slices of cheese to the gluten order he was preparing. He dressed that sandwich with cheese, but when he realized that he had positioned one slice too many on the gluten bread, he tossed it back into the bin of cheese, effectively cross-contaminating that bin of cheese with gluten. It could well have been used to make up a following GF order. 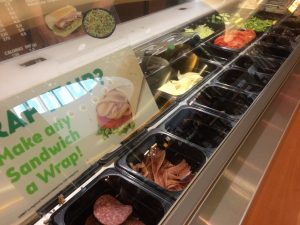 I saw the same thing occur with a handful of olives placed on a gluten bun only to have the excess scooped off the gluten bun and returned to the olive bin, for potential use on a subsequent GF order. Each and every bin in the prep line could have been cross-contaminated in this manner, with ingredients that touched a gluten bun and been thrown back.

Moreover, it is only common sense to understand that as each freshly gloved hand preparing a gluten bun dips in and out of the bins, they the staff are effectively cross-contaminating every ingredient bin they reach into.

I spoke to the self-identified shift manger ‘Al’ to ask whether it would be possible that ingredients for a gluten-free order to be sourced from bins that had not yet been brought into use in the main line (i.e. not cross-contaminated) but he said that this was not official SUBWAY protocol and that they it would simply be too busy to do so. I had to agree. There was a huge line up. 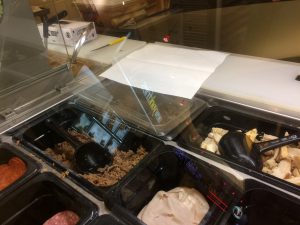 He also added (perhaps as an assurance) that his staff always ask people ordering GF sandwich whether they had a GF preference or an allergy. If they identified themselves as celiacs, he would strongly advise them NOT to partake of a SUBWAY sandwich, despite the very large sign that says ‘gluten-free.’ He was not aware that this might be a contradiction or misrepresentation of their signage/promotion.

For the above reasons, I am very concerned that SUBWAY, by prominently offering a GF bun option in in their signage, are representing those sandwiches as being safe for celiacs, particularly when the ingredients used to dress the GF buns are sure to have been cross-contaminated with gluten. Moreover, I am concerned that staff seem unaware that promoting a GF option that is not safe for celiacs shows a lack of awareness of Health Canada’s labeling laws – not to mention public safety. i.e. https://bit.ly/2umBVM3 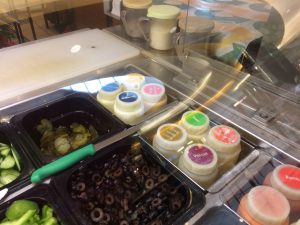 May I ask that you let me know what you have received my concern and that you will be undertaking to investigate, enlighten and impress upon SUBWAY, Health Canada’s regulations in regard to gluten-free labeling and celiac safety.

I thank you for your tremendous service to our community!

The Canadian Food Inspection Agency acknowledges receipt of this concern.

“I would like to acknowledge that on August 8, 2017, the CFIA received your complaint related to your concerns about gluten-free advertising and the potential for cross contamination at Subway, and that an investigation into this complaint will be carried out by the CFIA.”

“The goal of a complaint investigation is to determine whether a food safety issue or a regulatory violation exists, and the nature and extent of any problem. Food investigations are conducted in a thorough and consistent manner and the information obtained provides the basis for any CFIA action.”

“I will be in contact with you once the inquiry into this matter is completed. The identification number for this file is 82308.”

“Please do not hesitate to contact me if you have any further questions.” 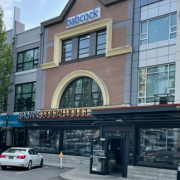 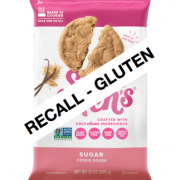 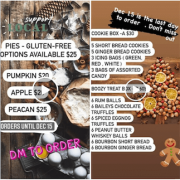 Getting to Know Glutenull Gluten-Free Bakery
Scroll to top
Change Location
Find awesome listings near you!